I am excited to head to Greensburg, PA today to shoot a music video with J. Trafford, for one of the new songs on Suavity Mouthpiece’s newly released “Bellows” CD.  smpop.tk

Also, I was experimenting with some old footage and found that setting it to Suavity Mouthpiece’s song All Moonight (off previously released “Peerless Suavity”) had a neat effect. Enjoy!

I love collaborating with other artists, particularly with musicians since I love working with them and their music – and promoting the greatness! (esp. being a former musician myself, as well as a dancer and lover of rhythm)

I recently completed a music video for Doors in the Labyrinth, a project of Josh Loughrey, who has a new EP out called The Sound of Her Wings, available now: https://doorsinthelabyrinth.bandcamp.com/album/the-sound-of-her-wings

I recently filmed footage for upcoming music videos for J. Trafford and his band, Suavity’s Mouthpiece, who have just released a new CD called Bellows, which is already getting great reviews! Also, available now:

Stay tuned for the upcoming releases of two music videos for songs from the new Bellows CD!

Lights! Camera! Cuba! (Pittsburgh, PA) –  Local independent filmmaker, Chris Mason, of Spinning Goat Productions is pleased to announce a trip to Cuba in June, as part of a documentary project about long-time Pittsburgh Afro-Cuban band Guaracha.  The trip is made possible through an Advancing the Black Arts Pittsburgh grant from The Pittsburgh Foundation and The Heinz Endowments.

Traveling with the Pittsburgh contingent are the film’s director, Mason, assistant, Brenda Solkez, Guaracha founder Miguel Sagué Jr., and his son and current band leader, Miguel Sagué III (“Cha”).  The crew will head to Santiago de Cuba and Havana documenting Afro-Cuban music, dance and culture. “The main theme of the documentary is to present the African heritage evident in Cuban music and culture, in order to provide background and context to the music and dance styles that Guaracha – via the Sagués: Miguel, his wife Lenia, and Cha – brought with them, and continue to share with audiences in Pittsburgh.”

Cuba had the longest existing African slave trade compared with other countries in the Americas, and had a more continuous influx of African slaves brought to the island over time, due to the high mortality rate of slaves working on the sugar plantations. African cultural practices were preserved due to the high concentration of African-born peoples brought to Cuba.1 The Sagué family heritage includes African and Taíno background, and the trip to Cuba will explore their original birthplace of Santiago de Cuba, where the family patriarch, Miguel Sagué Sr. lived, but emigrated from in 1961 shortly after the start of the Cuban Revolution.

The documentary will attempt to present complex and rich African and Indigenous cultures and their effect on identity and expression in Cuba, and in communities outside of Cuba, like Pittsburgh, where this branch of the Sagué family has called home for 40 years. The finished piece will reflect the legacy the Sagués and Guaracha have created and how they share their Afro-Cuban and Indigenous culture with people of all ages and backgrounds, helping to keep their vibrant traditions alive in Pittsburgh.

The documentary will continue production through the summer, culminating with a concert and live documentary shoot at the Kelly Strayhorn Theater on July 1, 2016 at 7:30 pm. The concert is open to the public and will serve as a celebration/reunion party, bringing together the many fans, dancers and musicians who have danced to, played with, learned from, and even fallen in love to Guaracha’s music since the 1980’s.

For more information about the documentary, trip to Cuba, and concert, please visit http://amorguaracha.wordpress.com and the Guaracha Latin Dance Band Documentary page on Facebook.

1 from Race in Cuba by Esteban Morales Domínguez

I am very excited to announce that I am collaborating with 2 local musicians, Tom Moran (www.oudery.com) and J. Trafford (http://smpop.tk/) on a new film for the 2 Minute Film Festival and other festival entries to be announced.

This is the first recorded musical collaboration for them, and the composition is stunning! I have a lot of creative and editing work to do to live up to the music.

The film will include tons of clips from public domain archive home videos from 1930’s-1970’s U.S.  It shall be an interesting trip down (other people’s) memory lane! 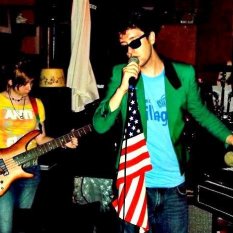 Check out the new music video I filmed and edited for Doors in the Labyrinth, a project of Josh Loughrey.
You can buy the new CD, The Sound of Her Wings here: doorsinthelabyrinth.bandcamp.com/album/the-sound-of-her-wings

The song MixedMedia occasionally gets stuck in my head, lol. I think I listened to it 1,000 times while editing for the 2015 2 Minute Film Festival – and it’s a favorite song!

prickly pear cactus bloom 😍
pink / ροζ
busy week. random pic. makes me laugh. every time. 😸
🔥🔥🔥
thanks to @kilbey1 for finding this! My fav!! Southern Death Cult 🤠
Zeit! the new release sounds amazing!!! 😍😎💀
last book haul since I can’t read any more books by the time I head overseas in July. or I guess the second suitcase could just be filled with books? lol 🤔
new book of poems by Tuhin Das, via @cityofasylum . 👏👏👏
yay, another update on Lerai from @r.e.s.c.u.e - she just started growing her tusks! 😍 Much respect to the keepers at Reteti & the Samburu tribe for their dedication to these wonderful animals. 🥰
more pics from Saturday’s trip to a ranch near Pedernales Falls State Park. old stagecoach, slightly menacing skulls, and a weird taxidermy. 😍😅😎
a lovely day visiting a ranch near Pedernales Falls State Park. 😍☺️
🤘 it has arrived!!! 🤘